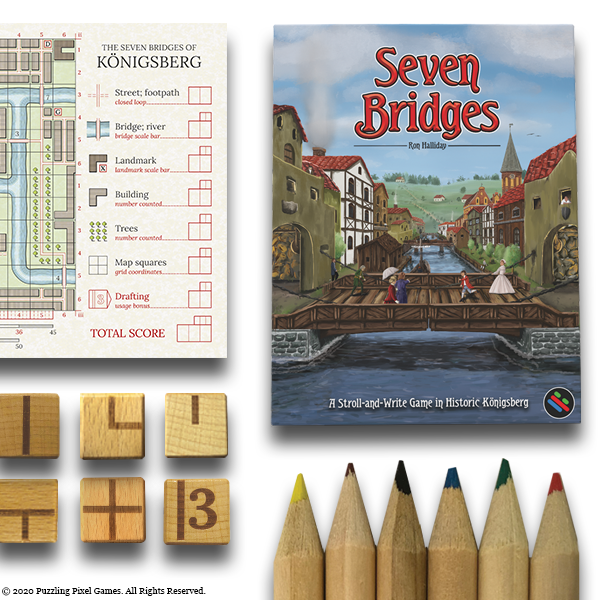 Come explore the European city of Königsberg and learn about the logic puzzle that made its bridges famous!

SEVEN BRIDGES is a roll-and-write dice drafting game in which players explore the historic city of Königsberg by coloring in connecting streets on their map. Points are earned by seeing different parts of the city, but the various ways to earn these points are only unlocked by crossing the city’s seven bridges.

Six dice are rolled at the beginning of each turn, and each player drafts the roads from one of these onto their map. Should they select the one that lets them travel furthest or the one that points them in the right direction? After five rounds, the player who tallies the most points wins!

Availability:
Seven Bridges is now in stock! Check out the store locator to see if there’s a store near you that carries Seven Bridges. Not many stores know about us, though. So if your local store doesn’t have it, ask them to order some from us directly or you can order right here!

What people are saying about Seven Bridges:

Please be aware of our shipping policies when placing an order.

This website uses cookies to improve your experience while you navigate through the website. Out of these, the cookies that are categorized as necessary are stored on your browser as they are essential for the working of basic functionalities of the website. We also use third-party cookies that help us analyze and understand how you use this website. These cookies will be stored in your browser only with your consent. You also have the option to opt-out of these cookies. But opting out of some of these cookies may affect your browsing experience.
Necessary Always Enabled

Any cookies that may not be particularly necessary for the website to function and is used specifically to collect user personal data via analytics, ads, other embedded contents are termed as non-necessary cookies. It is mandatory to procure user consent prior to running these cookies on your website.